AKM Antivirus 2010 Pro is a rogue antispyware program from the same family of rogues as Your PC Protector, Windows Antivirus Pro and Windows Police Pro. All these programs are identical except for their names and partially modified core files, which is necessary in order to remain undetected by legitimate antivirus and antispyware tools. As other rogues, the program installs itself onto your computer without your permission and knowledge, through the use trojans.

During installation, AKM Antivirus 2010 Pro will configure itself to run automatically every time when you start any application which have “exe” extension (99% of all Windows applications). The rogue also uses this method of running to block the work of standard Windows applications and most antivirus and antispyware utilities, so that they will not even start. The following alert will be shown when you try to run Notepad (and any program with “exe” extension):

Once running, the fake antispyware tool will start a simulation of system scan and list a variety of infections or potentially dangerous files that will not be fixed unless you first purchase the software. Of course, this is a scam. Like other rogue antispyware applications, the rogue want to force you to believe that your computer is infected. Important to know, AKM Antivirus 2010 Pro is unable to detect or remove any infections and nor will be protect you from legitimate future threats. So you can safely ignore the false scan results.

In addition to the above-described, while AKM Antivirus 2010 Pro is running, it will display fake Windows Security Center, a lot of nag screens, numerous fake security alerts and notifications from Windows task bar that stats:

AKM Antivirus 2010 Pro
Infiltration Alert
Your computer is being attacked by an
Internet Virus. It could be a password-
stealing attack, a trojan-dropper or simular.
Details
Attack from: 239.80.11.105, port 58962
Attacked port: 41567
Threat: HalfLemon

Internet attack attempt detected:
Somebody is trying to attack your PC:
This can result in loss of your personal information and
infection other computers connected to your network.
Click here to prevent attack

Security Warning
Malicious programs that may steal your private information
and prevent your system from working properly are detected
on your computer.
Click here to clean your PC immediately.

However, like the scan results, all these alerts, screens and pop-ups are a fake, so you can safely ignore them!

As you can see, obviously, AKM Antivirus 2010 Pro is a scam, which created with only one purpose – to reduce the amount of money in your wallet. When the first symptoms of infection stop using the computer to perform any action, ranging from document editing and finishing shop on the Internet. You need as quickly as possible to remove the rogue antispyware. Follow the removal instructions below, which will remove AKM Antivirus 2010 Pro and any other infections you may have on your computer for free. 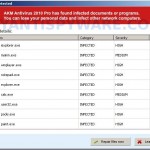 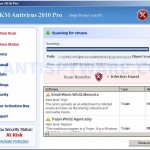 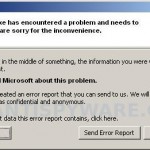 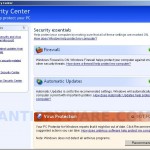 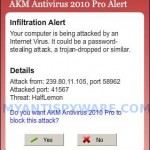 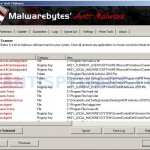 Save this as fix.reg to your Desktop (remember to select Save as file type: All files in Notepad.) Double Click fix.reg and click YES for confirm.
Reboot your computer.

Step 2. Remove Rootkit/Trojan TDSS
AKM Antivirus 2010 Pro may be installed with a TDSS trojan-rootkit that may redirect search results in Google, Yahoo, MSN, block an access to security websites and much more. You need remove the trojan before running an antivirus or antispyware tool.

Download TDSSKiller from here and unzip to your desktop.

Open TDSSKiller folder and double click the TDSSKiller icon. When the scan is finished, you will see window similar to the one below.

Select Perform Quick Scan, then click Scan, it will start scanning your computer for AKM Antivirus 2010 Pro infection. This procedure can take some time, so please be patient. Make sure that everything is checked, and click Remove Selected for start AKM Antivirus 2010 Pro removal process. When disinfection is completed, a log will open in Notepad and you may be prompted to Restart.

How to uninstall IntegerLocator app/extension from Mac (Virus removal guide)

How to remove My Security Engine (Uninstall instructions)

How to remove alphaantivir.com browser hijacker

Internet Explorer cannot display the webpage – How to fix it