Antivirus PC 2009 is a misleading application that classified as rogue antispyware program because it installed through the use of trojans and uses false scan results and fake security warnings in order to scare you into thinking that your PC in danger as method to trick you to purchase so-called “full” version of the software.

Once installed, Antivirus PC 2009 will configure itself to run automatically when Windows starts. Immediately after launch, the rogue will begin to scan your computer and display scan results that state the computer is infected with numerous infections. Important to know, all of these infections are fake, so you can safely ignore them.

While Antivirus PC 2009 is running, you will also see numerous security warnings. An example:

Warning
WARNING!
YOUR SYSTEM IS INFECTED

However, like false scan results, all of these warnings are fake and should be ignored! As you can see, Antivirus PC 2009 is designed only for one – to trick you into buying the software. Instead of doing so, use the removal guide below in order to remove Antivirus PC 2009 and any associated malware from your computer for free. 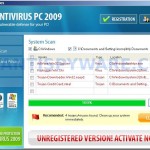 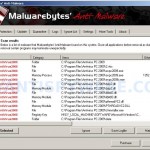 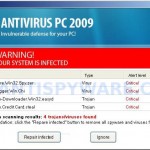 Make sure the “Perform quick scan” option is selected and then click on the Scan button to start scanning your computer for Antivirus PC 2009 infection. This procedure can take some time, so please be patient. Make sure all entries have a checkmark at their far left and click “Remove Selected” button to remove Antivirus PC 2009. MalwareBytes Anti-malware will now remove all of associated Antivirus PC 2009 files and registry keys and add them to the programs’ quarantine. When MalwareBytes Anti-malware has finished removing the infection, a log will open in Notepad and you may be prompted to Restart.

How to remove GreatDefender (Uninstall instructions)

How to remove SystemCleanerPRO (Uninstall instructions)

How to remove APCProtect (Uninstall instructions)