AntiVirus Solution 2010 is a rogue (fake) antivirus program. It is from same family as AntiVirus Studio 2010, Desktop Security 2010, etc. Like other fake security programs, the rogue uses misleading methods such false scan results and fake security alerts in order to trick you into purchasing the full (paid) version of the software. Of course, AntiVirus Solution 2010 is unable to detect or remove any infections nor will be protect you from legitimate future threats. Thus, you need as soon as possible to remove this malware from your computer!

AntiVirus Solution 2010 is promoted and distributed through the use of malware that come from fake online virus scanners and various misleading websites. When this malware is started, it will download, then install the rogue onto your computer. Next, AntiVirus Solution 2010 will be configured to run automatically each time you logon into Windows.

Immediately after launch, the fake antivirus will perform a system scan. It will state that your computer is infected with trojans, adware or malware and that you should purchase the full version of AntiVirus Solution 2010 to remove these infections. Important to note, all of these infections are all fake and don’t actually exist on your computer. So, you may easily ignore them!

While AntiVirus Solution 2010 is running, it will show various fake security messages and warnings that inform that your PC in danger. It is just an attempt to make you think your computer is infected with all sorts of malicious software. Some of the alerts are:

Your computer might be at risk
Antivirus detects viruses, worms, and Trojan horses. They
can (and do) destroy data, format your hard disk or can
destroy the BIOS. By destroying the BIOS many times you
end up buying a new motherboard or if the bios chip is
removable then that chip would need replacing

System critical warning!
You have been infected by a proxy-relay trojan server

However, like false scan results above, all of these fake security messages are just a fake and has been displayed to trick you into purchasing so-called full version of AntiVirus Solution 2010.

As you can see, AntiVirus Solution 2010 is a scam that has been created with one purpose – to scare you into thinking that your computer is infected, so you will then purchasing the program. Do not be fooled into buying the program! Instead of doing so, follow the removal guidelines below in order to remove AntiVirus Solution 2010 and any associated malware from your computer for free. 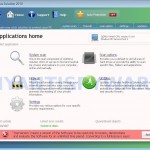 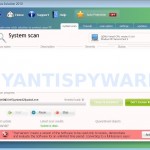 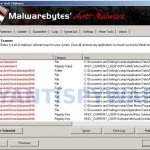 Select Perform Quick Scan, then click Scan, it will start scanning your computer for AntiVirus Solution 2010 infection. This procedure can take some time, so please be patient. Make sure that everything is checked, and click Remove Selected for start AntiVirus Solution 2010 removal process. When disinfection is completed, a log will open in Notepad and you may be prompted to Restart.

How to remove System Tool and SystemTool (Uninstall instructions)

How to remove ThinkPoint (Uninstall instructions)

How to remove antispytag.com browser hijacker