During installation, Sysinternals Antivirus will create a malicious service called “Adobe Update Service (AdbUpd)” that will start automatically every time when Windows loads. Once started, it will run the “Sysinternals Antivirus.exe” program, which is a core part of the rogue. Once installation process is complete, the rogue will perform a system scan and “detect” a lot of infected files, trojans, worms, and so on, that will not be fixed unless you first purchase the full version of the program. Of course this is not necessary. The scan results, as well as the “system scan”, is nothing but a scam. In reality Sysinternals Antivirus cannot detect and remove any infections, as well as not be able to protect you from possible infections in the future. Thus, you can safely ignore all that the rogue antispyware will show you.

While Sysinternals Antivirus is running, it will display a fake Windows Security Center and a wide variety of alerts, reminders, security messages from Windows task bar that stats:

Internet attack attempt detected:
Somebody is trying to attack your PC:
This can result in loss of your personal information and
infection other computers connected to your network.
Click here to prevent attack

Warning
Unwanted software (malware) or tracking cookies have been found during
last scan. It is highly recommended to remove it from your computer.

What is more, Sysinternals Antivirus can block the Windows Task Manager and most legitimate Windows applications, so that they will not even start. If you try to run a program (that have “exe” extension), your computer will display an alert from Windows task bar stating that the program is infected and then this program will be terminated. An example of the alert: 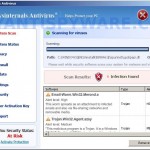 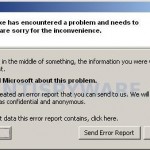 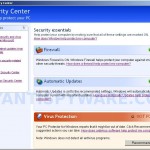 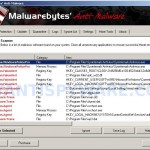 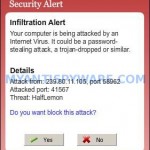 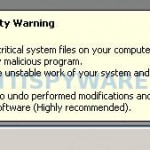 Make sure the “Perform quick scan” option is selected and then click on the Scan button to start scanning your computer for Sysinternals Antivirus infection. This procedure can take some time, so please be patient. Make sure all entries have a checkmark at their far left and click “Remove Selected” button to remove Sysinternals Antivirus. MalwareBytes Anti-malware will now remove all of associated Sysinternals Antivirus files and registry keys and add them to the programs’ quarantine. When MalwareBytes Anti-malware has finished removing the infection, a log will open in Notepad and you may be prompted to Restart.

How to remove cntprot.exe malware