XJR Antivirus is a rogue antispyware program which is an update to previously published rogue called AKM Antivirus 2010 Pro. Both programs are identical except for their names and partially modified files, which is necessary in order to remain undetected by legitimate antivirus and antispyware tools. Like other rogues, XJR Antivirus distributed through trojans that penetrate to a computer through a variety of vulnerabilities in already installed programs (Internet Explorer, Adobe Acrobat Reader, Adobe Flash Player, Java, etc). When the trojan is started, it will download and install the rogue without your permission and knowledge.

When XJR Antivirus is installed and started, it will simulate a system scan. The results can guess, this fake antispyware tool will find a lot of infected files, trojans, worms, and so on, that will not be fixed unless you first purchase the full version of the program. Of course this is not necessary, because the system scan is a fake, which is required in order for you to believe that your computer is infected with many viruses and trojans.

To achieve a more complete illusion that your computer is infected, all the time while XJR Antivirus is running, it will display a fake Windows Security Cenrer and a wide variety of alerts, reminders, security messages from Windows task bar that stats:

What is more, XJR Antivirus can block the Windows Task Manager, and the work of most legitimate Windows applications, so that they will not even start. If you try to run a program (that have “exe” extension), your computer will display an alert from Windows task bar stating that the program is infected and then this program will be terminated. An example of the alert:

From the above it is obvious, the presence XJR Antivirus not only desirable, but also dangerous because it can lead to a complete computer inoperable. Most important to know, the program is a fake, which is not fully functional, as antivirus and antispyware tool, and created with only one purpose – to reduce the amount of money in your wallet. If your computer is infected with this malware, then follow the removal instructions below, which will remove XJR Antivirus and any other infections you may have on your computer for free. 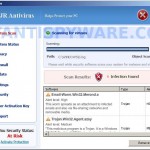 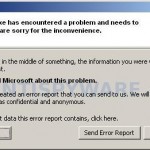 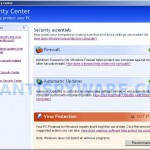 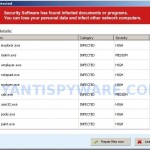 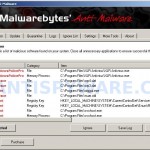 Save this as fix.reg to your Desktop (remember to select Save as file type: All files in Notepad.) Double Click fix.reg and click YES for confirm.
Reboot your computer.

Select Perform Quick Scan, then click Scan, it will start scanning your computer for XJR Antivirus infection. This procedure can take some time, so please be patient. Make sure that everything is checked, and click Remove Selected for start XJR Antivirus removal process. When disinfection is completed, a log will open in Notepad and you may be prompted to Restart.

How to remove ByteDefender (Uninstall instructions)

How to remove datprot.exe malware

How to remove SystemArmor (Uninstall instructions)